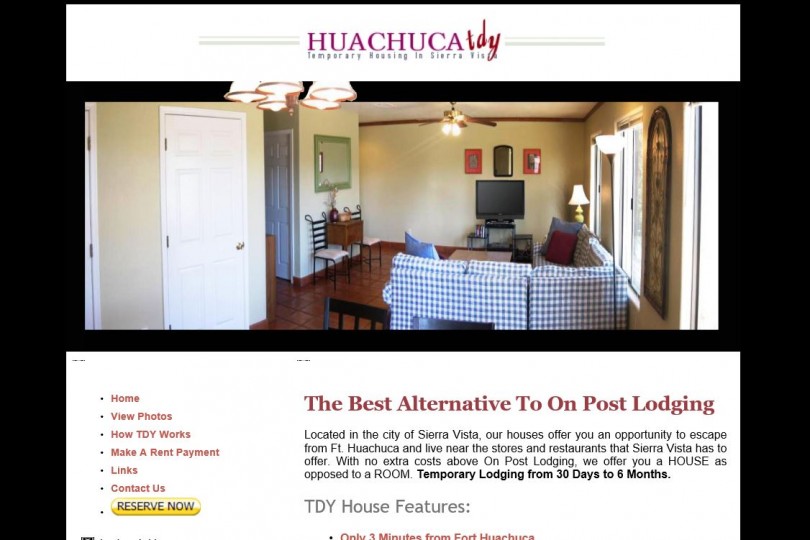 The book Rich Dad, Poor Dad spurred my first business venture. I wrote about that experience in a previous post called The Book That Changed My Life. Robert Kiyosaki talked about real estate a lot in that book and the benefits of leverage: essentially using your credit score to allow you to borrow money to buy assets that you can make money from. I had a good credit history since I had been using a credit card during the last two years of college and had been paying off the balance each month, so I knew I could use that somehow to my benefit.

I was supposed to show up to Officer Basic Course (now called Basic Officer Leadership Course) at Fort Huachuca, AZ in about 2 months and I was looking for housing options for my wife and I.  In talking with classmates of mine attending the five month course alongside me it was very apparent that there was a shortage of housing/lodging options at Fort Huachuca.  The on-post hotel could only accommodate 10% of us, so the rest of us were going to receive a statement of non-availability to live for five months in a hotel off-post at a rate of $74/day.  This sounded like a business opportunity to me.

I wanted to get into real estate investing and I originally thought I would buy a house and rent it out at a little over my mortgage and make maybe $100/month in extra income.   But after seeing this problem at Fort Huachuca, I saw a way to make even more money from my house. I essentially decided to become the AirBnB for military folk on TDY…well… two years before AirBNB became an idea.  I polled some of my classmates and asked if they preferred to live in a house with 2 floors, 3 bedrooms, large living room and kitchen with wifi internet, cable, and XBox, or would they rather live in a one-bedroom stanky hotel room  with no kitchen. Two of my classmates agreed to be my first tenants and started paying me $74/day each to live in my place.  Now instead of making $100/month, I was making more than $3000/month from my house.

However, in order to bill people and for them to submit their receipts for reimbursement, I had to legitimize myself.  I figured out how to get a DBA (Doing Business As) name and named myself HuachucaTDY.  I then learned how to make a website. I had minimal HTML skills from college, so I downloaded a template from online and started hacking it to customize it to meet my needs.  The website was pretty basic with a form to accept a reservation request and I later added a link for tenants to pay online.  The online payment part was probably the hardest integration since I had to find out how to accept credit card payments.  Resources were scarce back then and the process of approval to be a credit card merchant was long and detailed.  I used a reseller payment processor called ShopSite and the payment gateway called Authorize.net. If I were to set this up today, payment processing is much more streamlined and I’d recommend a site called www.stripe.com.

So this may seem like a lot of work and contrary to my intentions of building passive income.  You’re right, but I quickly turned it into passive income by finding a property manager.  Having someone to manage the house essentially would pull me out of the system and allow me to just receive income.  However, this idea of renting out houses for the short term was new and the model wasn’t known by many property managers in the town of Sierra Vista. So I went around town finding someone that was willing to take a leap of faith in me.  I eventually found an established Real Estate Company that was trying to expand their rental property management portfolio.  My pitch to them included the fact that I had the house already booked for the next 8 months due to my website. I would pay them 10% to give and take keys to tenants and coordinate cleaners to show up between stays.  It was a win-win for both of us and I successfully turned my business into a passive cash generator.

A few months after I started the company rates increased to $81/day and reservations from the website kept all three of my bedrooms filled on a continuous basis.  I started to get more demand than I had rooms, so I decided to expand. A few interested colleagues wanted to get in on the business model and I agreed to help them. They bought houses and I provided the tenants for them, the processing of their payments, and my property manager. Within 2 years, we were managing six houses in Sierra Vista and making great profits.

However, I learned a lesson about new business models from this first venture of mine: once you establish yourself as successful, prepare for a flood of copycats.  Suddenly it seemed as nobody was renting their house as long term rentals anymore and everyone was trying to target the TDY market.  I started being satisfied with just one tenant.  Because TDY rates continued to increase, even one tenant was making good profit for me so I wasn’t too bummed and I couldn’t be too greedy.

If you want to know how it looks now… it doesn’t. The city got involved and wanted to charge extreme taxes on the profits people were making and Fort Huachuca decided to solve their problem eventually and converted barracks to hotels for visiting students.  Things have gone back to the status quo and people are renting as long term rentals again. The ride was fun and exciting though. Even though there was a lot of competition in the end, the early innovators like myself were at least able to make killings in the beginning.  The profits from this first venture funded almost all of my ventures for the following five years.