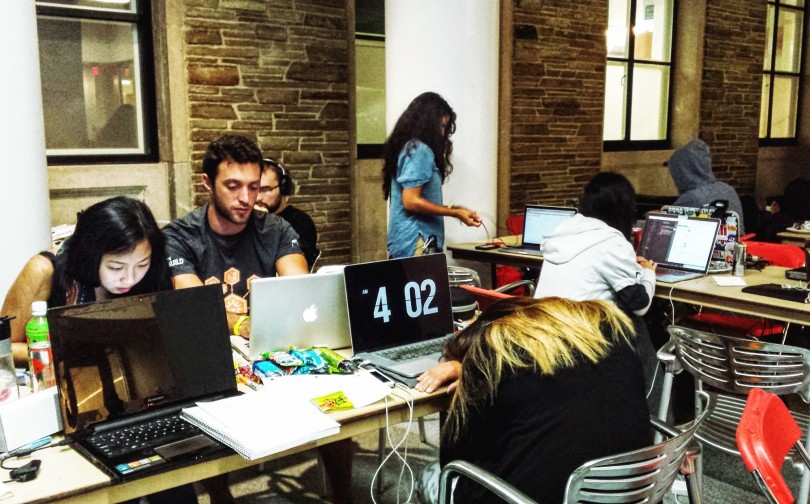 I competed in my first technical Hackathon and learned some new leadership skills.  It was what you typically think of when you hear “Hackathon”, which was 36 hours of non-stop coding to try to develop a product from scratch and present it to a group of judges.  The only problem for me is I never learned how to code.  Sure I can build websites and make things somewhat pretty with free knock-offs of Adobe Illustrator or Photoshop, but when it comes to the nitty-gritty of building a piece of software to respond to inputs from a user, do calculations, and then do some kind of action, that hasn’t been my forte.  So the biggest difficulty for me in an environment where everyone was working hard and not sleeping, was to figure out how to contribute.

Somehow I ended up with a four man team that consisted of one other MBA business student, a fairly new computer engineer and a designer.  We were not necessarily primed to make a cool technological innovation without high-caliber engineering manpower but we had good attitudes and energy to burn.

Capital One was one company that was present and presented a challenge to make an innovative solution for their company and we wanted to take on their challenge.  Our solution turned into a peer-to-peer loan service where a person who needed money could request money from his contacts and pay interest to the lender.  The key here was that the lending was done between trusted friends.  This meant that people were not borrowing based on their credit score, but more on the trust score that their friends would associate with them.  Additionally, the product would remove the awkwardness of asking for money because you are paying them interest and the lender is earning money as well. Check out our video demo by clicking play on the YouTube video attached.

One of the most beneficial things I gained from this hackathon was being able to put into practice the advice I received from a mentor that left the army and is now the CEO of a large marketing firm.  I asked him how he learned to adjust to leading creative and draw the line between micromanagement and feeling like you lack the necessary skills to make a significant impact on the product.  He told me that he took the same approach with creative people as he did in Ranger school where he felt like the underdog amongst people that knew each other and came from similar backgrounds.  He said that he had to volunteer for everything including carrying the heavy machine gun, and go above and beyond despite his lack of energy to show at all times that he was a team player and wanted to be involved. When he was moving up in the creative marketing world, he felt out of place again but made sure to bring coffee to his employers and sit down next to them to show interest and add excitement to what they were doing.  His employees started to enjoy his energy and his dedication to their process and worked harder and better because they saw his efforts to support in any way possible.

This was the approach I tried to take during this hackathon.  My team worked hard and I tried to be there every step of the way.  Seen as the underdogs with limited technical ability, we actually won the top prize for a newbie team at the competition, beating out over 10 other Newbie teams.

Since the hackathon I have been seeking out excellent engineers to work with on a real world business.  I was able to partner with an engineer that was present at the hackathon but worked with a different team.  He told me recently that one of the reasons he trusts going into business with me is due to his observations of me during that hackathon.  Although I wasn’t a computer engineer I impressed him by staying awake through the night with the engineers giving support in any way I could.  Showing your willingness to suffer with those that suffer goes a long way.

*our Splash page is here: www.ioume.folau.us