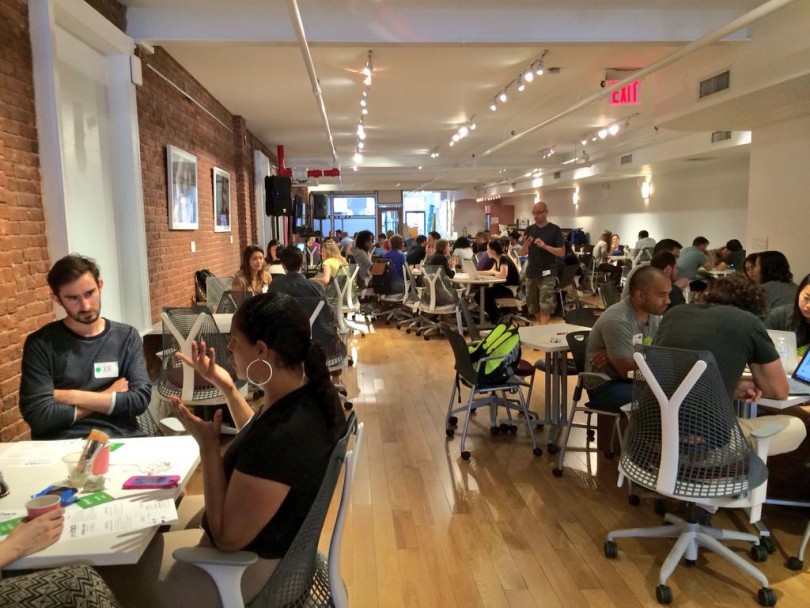 In the tech startup world, it is becoming increasingly popular to train your creativity and teamwork skills by competing in Hackathons.  Since coding and software development isn’t my strongsuit, I found the Protohack in NYC, put on by the folks at www.protohack.org, to be the best way for me to start and test my abilities.  At this Hackathon, you have less than 12 hours to create a team (2-4 people), agree on an idea, and prepare powerpoint slides (actually created using Google Slides), to present your idea to a group of judges.  They provide you with easy prototyping tools that allow you to display what it would look like on a smartphone, so it all involves no coding at all.

One of problems of being an aspiring entrepreneur is that we can often find ourselves talking about world changing ideas all day. I like to make lists of ideas that come to me on a near daily basis. I keep those in a list on my Google Keep app on my phone.  However, as I am transitioning my mindset from being a passive entrepreneur to a full time entrepreneur, I need to start flushing out my ideas and putting them out on the line to be critiqued.  This Hackathon was one of my first opportunities to hear constructive criticism from team members that have similar goals to mine and judges that have experienced entrepreneurial success.

When I started the MBA program at Cornell Tech, I created a goal for myself to not lose sight of my end goal of starting something remarkable.  Therefore, I let my class of 42 MBAs know that I wanted to start hosting business idea brainstorming sessions at my apartment.  The name would be “the Idea Storm”.  My first session had an attendance of about 20 people and everyone was required to come with an idea.  We split up into groups of four and helped each other develop our ideas, focusing on the problem we were solving and the audience that was being served.  At the end of the Idea Storm I announced that the Protohack was coming to NYC and it would be a great place to try out some of our ideas and see what Cornell Tech could do.  We ended up getting seven people registered for the event, enough to make two teams.

In the week leading up to the Hackathon, our two teams agreed on two ideas from the Idea Storm to focus on and started getting to work on how it would look.  We used one of my ideas, which was a way to automatically create a shopping list by taking pictures of recipes with your phone.  My team consisted of two guys, one an owner and manager of an app development company in India and the other an entrepreneur involved in a few businesses in Venezuela, and one girl, who worked in tech marketing.

Once we arrived at the Protohack in NYC were were able to skip over the team building and idea forming portion and get into the prototyping.  However, as we began work, we had an inspirational moment where we realized that a simple way of comparing multiple supermarkets’ prices did not exist yet.  Therefore we pivoted our idea within the first hour of the Hackathon to sell it as the “Kayak” of online grocery shopping.  Now with the shopping list that was compiled from the pictures we took of our recipes, we were able to get price quotes from several online grocers in our area.

At 8:00 pm, the 30+ teams started to pitch their ideas.  The one thing I learned from this portion of the hackathon is that the pitch delivery is absolutely paramount.  Some ideas had the makings of something great but they did not correctly time their pitch or adequately rehearse, so their idea turned into an unfortunately flop in front of the judges.  Some others spent too much time on their prototypes and not enough time explaining who their customers were or their business plan.  But as for the two Cornell Tech teams, we had come in to the competition understanding the importance of the pitch, and were prepared.  We both landed spots as one of five finalists. 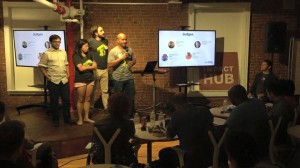 In the finals, we had to conduct a 5 minute Q&A with the judges.  The judges asked us a lot of questions about the potential add-ons to our product and not enough analysis of the product we felt was best for initial adoption in the market.  In the end we did not finish top 3 but left with some free software and a great team experience.

Now the question remains… Should we continue work on our Online Grocery Shopping App, “Sav’r”?