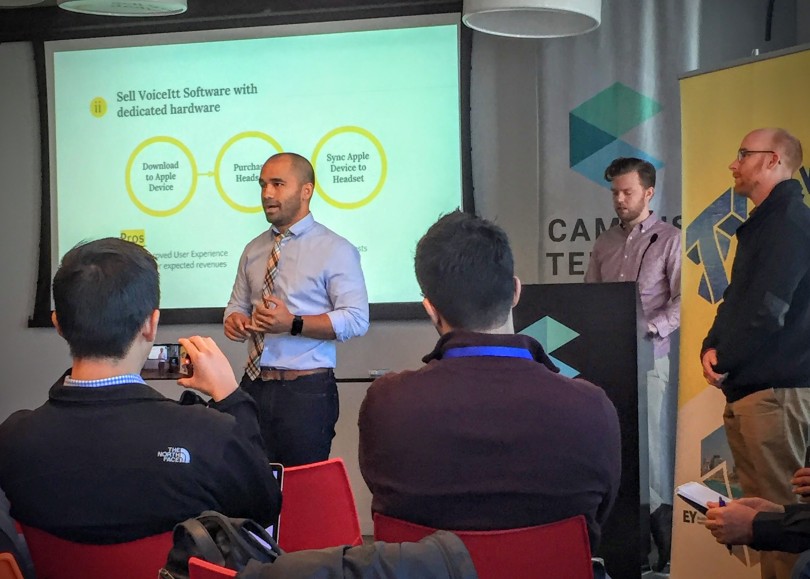 Two weeks in Israel are now a blur. The amount we accomplished in such a small amount of time is unbelievable. In addition to presenting final recommendations to startup companies we consulted last semester, my fellow Cornell Tech MBAs and I immersed ourselves in the Israeli tech industry, culture and of course, food. We toured Jerusalem, Tel Aviv and the Dead Sea, participated in a hackathon with a design school and met with venture capitalists and CEOs.

Three months ago, two classmates and I were assigned two Israeli companies to consult for as part of the Global Trek course taught by Professor Roni Michaely. The first, a relatively new Startup called Voiceitt, built an app to help individuals with speech disabilities. For individuals whose speech isn’t discernable to most, the app translates their sounds into more intelligible speech using a synthesized voice.

The second startup we consulted for was a little more established and had a decent amount of funding. Comigo sells set-top boxes (that thing you point your TV remote at) to TV providers that allow their customers to do more than simply select channels. It gives viewers a richer experience through social media integrations, shopping options, and details about sports games like starting lineups and play-by-play reports.

In the two months preceding our trip to Israel to present our recommendations, my team video conferenced each company every week. We determined what strategic decisions the companies were trying to make and got to work researching and setting up interviews with customers and other companies in the industry. Now that I spent two months trying to dissect the traditional TV/media industry, I realize that I don’t want to ever be a player in it.

Once in Israel, venture capitalists, banks and startup incubators graciously donated space for our final presentations. In addition to the leadership teams of our startups, each group of MBAs presented in front of a panel of 5-6 investors and experts as well as our MBA and Computer Science classmates.

When working for Voiceitt, we analyzed multiple business models they could implement. Voiceitt wanted to reach as many afflicted people as fast as possible, which was taken into account in our recommendation.

Our presentation focused on dissecting the pros and cons of two main business models: selling the product as an app in the Apple AppStore vs. selling it as a medical device reimbursable by insurance. The process of qualifying for medical device reimbursement is arduous and limiting, so we recommended selling Voiceitt in the AppStore to the public.

We also explored building a proprietary hardware device to accompany the app for better quality and gave the company a breakdown of costs and technology.

When making our recommendations for Comigo, we laid out the current progress of dynamically inserting TV commercials in Europe, as this functionality is something Comigo wants to help provide. Although dynamic ad insertion isn’t on live television in Europe yet, we wanted to find television operators for them to target in the future.

To do this, we found channels that are streaming online and utilizing “dynamic ad insertion” and researched operators that stream these channels on television. Our recommendation included three progressive operators for Comigo to target in three different European countries.

Even though the daily workload of presenting around 30 presentations in 10 days was intense, it was offset by some amazing food, drinks, cultural sightseeing, entertainment and good old MBA fun.